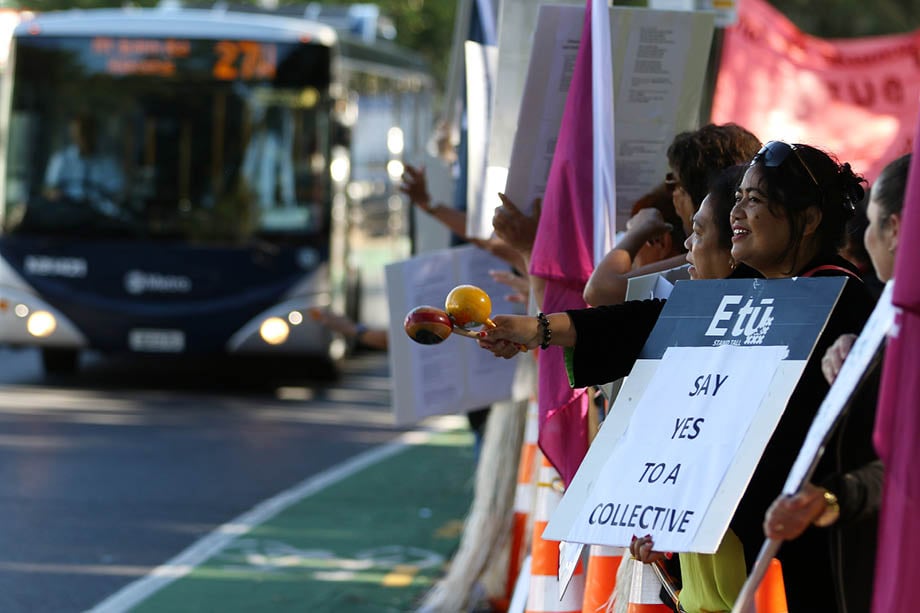 Lifewise homecare support workers are continuing their fight for better working conditions, even as they now face a possible lockout from their employer in response to their strike action and pickets.

From Saturday, members will be going ahead with more strike and picket action, outside the Lifewise offices in Mount Eden.

Lifewise, an Auckland-based organisation which is also part of the Methodist Church, has issued a lockout notice to all E tū Lifewise members.

For more than a year and a half, Lifewise members, who care for vulnerable Kiwis including seniors and those living with disability, have been trying to negotiate their first collective agreement with increased sick and bereavement leave.

E tū delegate Helen Taufa says the move to lockout members is “extreme”, but members will not back down.

“Instead of coming back to the bargaining table to negotiate and talk about things, [Lifewise] has gone to this extreme.

“For them to lockout all members – it’s harsh. We’re disappointed it’s come to that point,” she says.

Another member, who doesn’t wish to be named, says her family struggles to pay the bills even though she and her husband both work, and taking action is the only way to get the attention of Lifewise.

“Striking is the only way to get more money for my family,” she says.

Members of the Methodist church and family members of those receiving care have also strongly criticised the lockout move from Lifewise and are “deeply concerned” about the organisation’s treatment of members during the current dispute.

A church member says: “The Methodist Church has a strong culture of social justice and fairness. I am deeply ashamed of Lifewise’s behaviour.”

An E tū Director Kirsty McCully says in New Zealand, low-paid care workers shouldn’t have to go on strike to win hours they can survive on, or to know when they will be working from week to week.

“The employment model in homecare is broken, and these workers are bearing the brunt of it,” Kirsty says.

“Now, a ruthless employer, usually known for its good work in the community, is pushing its own workforce to the poverty line with a lockout which would see workers without income.

“However, the workers have said they are steadfast and will stick together until they achieve a fair deal at Lifewise.”

Lifewise members will be picketing on Saturday 23 January and Monday 25 January at 227 Mount Eden Road, Mount Eden from 7am-11am, and striking from Saturday to Monday. 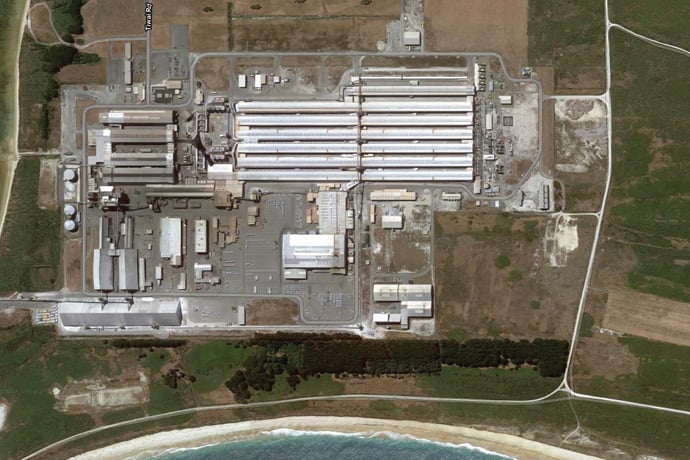 Tiwai workers and the Southland community will now have time to plan a proper transition with the future of the Rio Tinto smelter secured for the next four years.

On January 14, it was announced that the smelter’s owner, Rio Tinto, has signed a contract with electricity provider Meridian Energy to keep the operation open until the end of 2024.

Originally, the company had proposed to close the smelter at the end of its contract in August, potentially impacting around 1000 workers and putting many local businesses and suppliers at risk.

Delegate Owen Evans says the majority of Tiwai workers are “quite happy with the decision” about the contract extension.

“For those with big mortgages and families, it’s been a relief for them. For younger ones, it removes the panic of having to search for a job immediately,” he says.

“Workers can stay at Tiwai in the interim and have the time to upskill to other roles they may want to do in future.”

The announcement is positive for many others in the community too, Owen says.

“A lot of people – for example, those in operations, suppliers, or food places – also rely on Tiwai.”

Owen says since the closure was first proposed, it’s been a struggle to attract new workers, with many leaving the company.

He says he hopes that will change thanks to the certainty the new contract provides.

Joe Gallagher, a negotiation specialist at E tū, says the news is a “win” for workers, the union and the community to enable a ‘Just Transition’.

“Four years gives everyone a lot of time to make choices about the future – whether that’s training, looking at different industries.

“Now people have a chance to put together a plan. It’s an opportunity for all parties, including the union, to put a frame around how things will look in 2024 and beyond.”

Since the proposed closure was announced last year, E tū has called on the company and the Government for a Just Transition to make sure the impact of switching to low-carbon or alternative industries doesn’t fall disproportionately on workers and their communities.

Joe says now there’s a new opportunity to set an example of a Just Transition model.

“We can make it the gold standard for what might help other communities to deal with this same question,” he says. 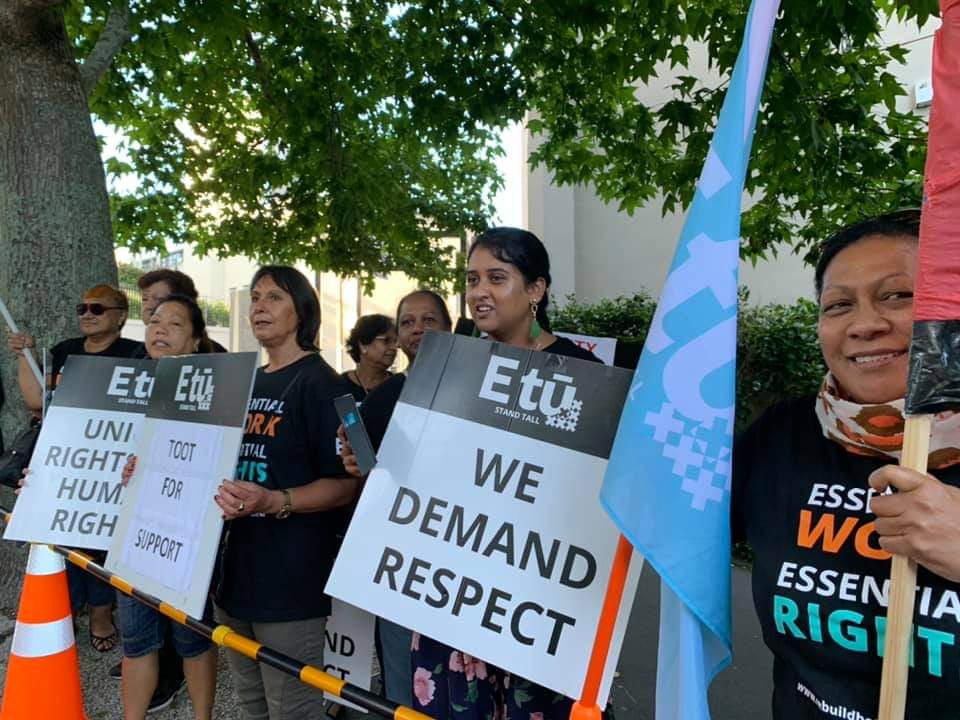 Lifewise homecare workers continue their action to win a fair collective agreement which protects quality care at the Auckland-based homecare provider, taking strike action from 6am-9pm tomorrow (Wednesday) and picketing outside their employer’s premises at 227 Mount Eden Road from 7am until 11:30am.

Family members have started to complain to the Auckland District Health Board in support of the reasonable demands of the workers but are unhappy about the poor coordination of care from Lifewise, and the increased turnover of long serving employees due to their working environment and low hours.

In addition to client complaints, members of the Methodist Church, of which Lifewise is a part, have begun to express their concern that the homecare arm of The Lifewise Trust is failing its employees and clients.

“It’s a shame to me that Lifewise is not responding to the direct concerns of homecare workers about their low hours which keep them in poverty,” says an Auckland lay preacher who prefers to remain anonymous.

“It’s up to those of us in the church who feel strongly about the social justice principles to make the church step up and practice what it preaches,” she says.

“I and a number of my colleagues will be taking this up within all the channels available to us – within our Synods, with our church ministers, and with our church representatives.”

“They can’t survive on the hours they’re receiving and the model at Lifewise is set up to keep employees in poverty, shouldering all the financial risk for the organisation,” she says.

All are invited to the picket tomorrow at 227 Mount Eden Road from 7am until 11:30am. Members of the Methodist Church will be attending the picket.

E tū has joined New Zealand’s Foreign Affairs Minister, global unions and others in condemning the arrest this week of over 50 prominent Hong Kong pro-democracy activists.

Among those arrested was aviation worker Carol Ng, the chair of the Hong Kong Council of Trade Unions and former general secretary of the British Airways Hong Kong International Cabin Crew Association. Carol was released last night but the arrests are part of an ongoing and escalating intimidation of the democracy movement in Hong Kong.

E tū spokesperson Sam Huggard says the union extends its solidarity to Carol and other trade union and democracy activists.

“An attack on democracy is an attack on ordinary working people and communities and cannot be tolerated. We join with others in condemning this move and call on Hong Kong Chief Executive Carrie Lam to stop this intimidation immediately,” Sam says.

The detentions were made by local police, under the controversial National Security Law, for trying to “overthrow” the government by holding primary elections for pro-democracy candidates in last year’s postponed elections. 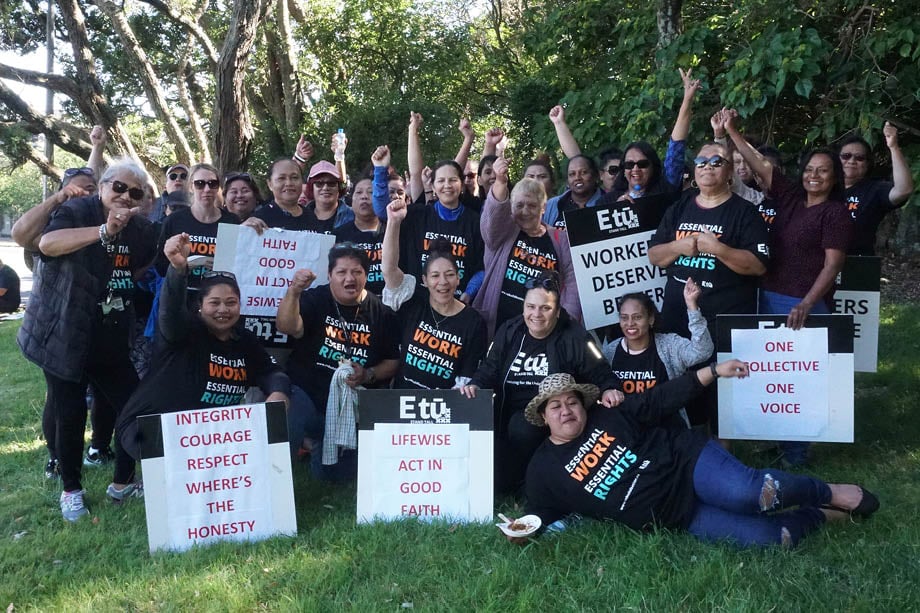 It’s not a very ‘Happy New Year’ for Lifewise homecare workers, who will go on strike for at least the next three full days unless the Lifewise Trust is prepared to settle a fair collective agreement.

Homecare workers at Lifewise provide care and support to our elders and people with disabilities for the Auckland District Health Board (ADHB). The care workers have been in negotiations with their employer for more than a year and a half.

The workers want to see commitments to deal with their guaranteed hours of work, the lack of which is keeping some of them on the poverty line. They are also calling for improved leave, which their employer previously agreed to and then reneged on.

“Lifewise does a lot of good work in the community and they say they stand for social justice, but there’s a double standard at Lifewise when their own workforce of homecare workers can’t afford to live decent lives,” says care worker and E tū delegate Helen Taufa.

E tū Director Kirsty McCully says this is an issue of equity for the largely women and Pasifika workforce.

“These women cannot live on their incomes, and the inadequate conditions at Lifewise contribute to the disadvantage that these Pasifika women experience,” Kirsty says.

“It’s one example of a much wider problem. The Human Rights Commission has recently launched an inquiry into the pay gap for Pasifika women and E tū has invited the Equal Employment Opportunities Commissioner Saunoamaali’i Karanina Sumeo to meet with Lifewise homecare members and hear their experiences.

“It’s a shame to have to call out an organisation which otherwise does good work, but Lifewise, if it truly supports justice for the community, should get its own house in order first and stop contributing to these societal issues of poverty and inequality,” Kirsty says.

“Lifewise is a part of the Methodist church, and as such we feel it should be above disrespecting its homecare workforce in this way.”

Homecare workers will picket at the Lifewise Trust’s CBD offices at 385 Queen Street from 7:15-9:30am on Tuesday 5 January, and their strike action will continue in the following days. They will be joined by members of the Pasifika community, including Cook Island drummers.