Delegates and representatives from across the country and all E tū industries gathered in Auckland in July for two days of action, learning, and solidarity at our Biennial Conference 2022. The conference theme was Decent Work – E tū, e puta, e karawhiua, which translates as ‘get up, get out there, get active’. The programme was jam-packed with speakers and sessions exploring the many facets of Decent Work.

As the highest decision-making body in E tū, the conference debated remits to keep our union strong and accountable, including officially enshrining Decent Work as a core union objective. A range of local and international guests shared stories from across the trade union movement. Carl Leinonen, a union campaign coordinator in the global arm of the Service Employees International Union (SEIU), said he was “ecstatic” to be joining us in person, because our campaigns for Decent Work and Fair Pay Agreements in particular are world-leading.

E tū cleaner and Komiti Pasefika activist, Malia Motusaga, had a great time at the Conference. “I really liked the first day, which was all about celebration. We welcomed our new Co-President, and I liked hearing from all the brothers and sisters across our different industries,” Malia says. “It was especially good to hear all the support for Fair Pay Agreements. I thought Auckland Mayoral candidate Efeso Collins was great. He was really encouraging to all the members for what we are doing, and for our hard work. He’s all about the people.”

Malia won the prestigious E tū Activist of the Year award, for her ongoing support of her fellow members and relentless commitment to our union’s campaigns. She says the award was a big surprise. “I was shocked, I wasn’t expecting that. To be honest, the work I do is for my love for all the hardworking cleaners and security guards out there. I appreciate the award, and I just want to thank members for their hard work – keep doing what you’re doing.” It was the first E tū conference for our new Youth Network Convenor, Dan Harward Jones, who particularly enjoyed the opportunity to chat with his fellow delegates.

“My favourite part was meeting members and activists from our wide range of industries,” Dan says. “It’s refreshing to hear about diverse challenges and reassuring to learn how much we have in common. “I learned heaps about solidarity from outside our union. There’s a world of organising and activism in Aotearoa and even overseas that actually links with E tū’s kaupapa, which was amazing to see.”

As the new Youth Network Convenor, Dan says it’s important to encourage young people to get involved with union activities.

“We’re not just the future of the union movement – we’re here right now! Our generation are some of the most vulnerable to exploitation, but also some of the most socially aware. That energy and hope will make real change for our union and workers everywhere.” 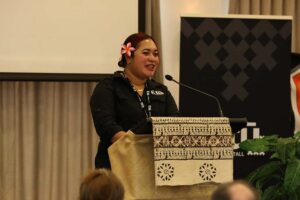 Editorial: Standing up for Decent Work

Social procurement for a Just Transition in Southland

Workers at the centre of industry transformation