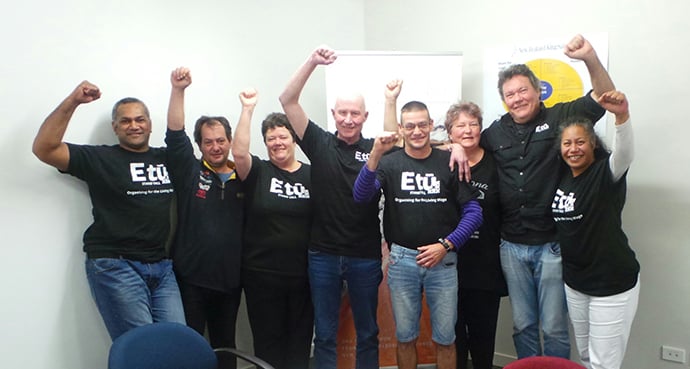 E tū King Salmon members and delegates have won an impressive three-year deal including a pay rise of more than 10% for King Salmon’s lowest-paid workers. That’s a pay rise of almost $2 an hour.

For other workers, a series of pay rises will lift wage rates by April 2019 to a minimum of $20.20, the current Living Wage. For more senior workers, wage rates over the 3-year term are expected to match the projected Living Wage.

The bargaining team also won better conditions, including overtime by mutual agreement, and improved higher duties allowances. And there were no claw-backs!

E tū delegate Kathryn Wells says: “There was a mutual understanding between the Union and the company of the need to explore ways to get workers on the journey towards a Living Wage.

“We worked hard in bargaining to get the best result possible without losing conditions. While we haven’t achieved the Living Wage for all members we have taken a massive step towards it,” she says.

This has been a great journey, from the worksite meetings held last year to introduce the Living Wage

E tū is awaiting an Employment Court decision on a case which targets the exploitative labour hire system.

The case, taken on behalf of labour hire workers Kamlesh Prasad and Liutofaga Tulai, argues their engagement by LSG SkyChefs, via a labour hire company, is a sham to avoid the workers’ employment rights.

The Union has asked the court to declare that their real employer is LSG SkyChefs – not the labour hire company.

For four years, LSG employed the workers on the minimum wage, with no holiday, sick leave or Kiwisaver entitlements, and they had to pay their own ACC cover.

In 2015, after E tū took legal action, the workers were offered employment agreements, which included those entitlements. But E tu’s lawyer, Peter Cranney told the court the relationship remained one of “control and subservience.”

Labour hire worker, Liutofaga Tulai told the court she worked at LSG for six years with no secure hours or employment before being dismissed after LSG told her she had been there too long.

Our members at Etel in Auckland show what can be achieved when workers stand tall together for fair pay.

In June, members walked off the job for a day after Etel, which manufacturers power industry transformers, offered a measly 40 cents an hour pay rise, which was then lifted to 50 cents.

The response showed Etel how strong the feeling onsite was – over 90% of workers voted for a second two-day strike. Site delegate Trevor Woodger says workers wanted a pay rise of $1 an hour and they were determined to get it.

The company buckled and agreed. The $1 an hour increase means a 6% pay rise for Etel’s lowest paid workers – that’s over half Etel’s 180-strong workforce.

Trevor says he and his workmates are “ecstatic”.

“It’s absolutely fantastic. It just goes to show the power of the combined force of members and what
it can achieve.

“The union is the guys who belong to it, who stood up for what they deserve and they did deserve it. These are skilled and experienced workers,” says Trevor.

This fantastic result reflects the strength of the union membership at Etel – close to 90% are union members, and that’s what gave them the power and confidence to fight for a fair pay deal.

Union power works and the more members there are onsite, the better the deal workers can win.

The wardens were protesting the Council’s refusal to agree to a collective agreement which includes their wage rates.

The dispute has dragged on for two years, with the Council agreeing to consult over wages and include them in policy, but it won’t negotiate pay rates nor include them in a union collective agreement.

E tū will take the issue to the Employment Relations Authority if the impasse is unresolved.

“I believe every worker in this great country of ours deserves to have a collective agreement with pay rates included,” says delegate Mike Fiechter. 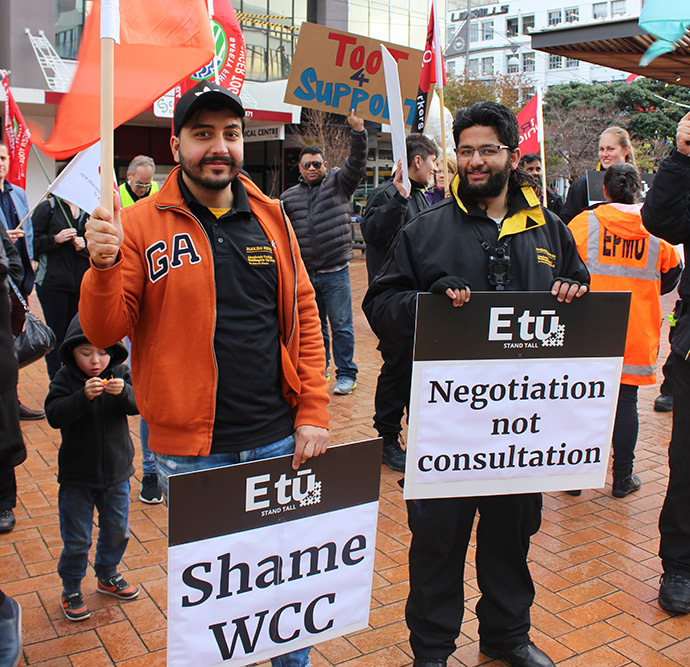 E tū is supporting former workers at A&G Price in Thames after the shock closure last month of the historic foundry, affecting 40 members.

The foundry was put into voluntary liquidation with the liquidators confident it remains a viable business. They have been seeking a buyer and a skeleton workforce remains at the Foundry completing orders.

Meanwhile, as workers job-hunt in earnest, E tū staff is working with WINZ, passing on job offers received following the closure. Ensuring members get their full entitlements to redundancy, annual leave and backpay is also a top priority.

“Hopefully they can pay everyone what they’re owed and everyone can get on and find work,” says Price’s delegate, Gary Richards.

“The community’s been very supportive. We’ll just have to wait and see what happens from here,”
says Gary.

Manufacturing industry members came together for mass meetings in Auckland, Wellington and Christchurch to hear about what E tū has planned for the renegotiation of the Plastics Industry Collective Agreement (‘The Plastics’).

The members endorsed seeking a fair and reasonable pay rise as well as improvements to health and safety.

The Plastics is a multi-employer and multi-union agreement that sets the trend for the plastics manufacturing industry.

Figures presented to members at the meetings showed Plastics members’ pay went up 31% over the past 10 years, compared to the labour cost index which rose by 24%, while the consumers price index rose by just over 22% over the same period. This means workers who organise collectively are much better off than workers on individual employment agreements.

Negotiations for the renewal of the Plastics began in late August and the union bargaining team hopes to roll out a settlement to members from September. 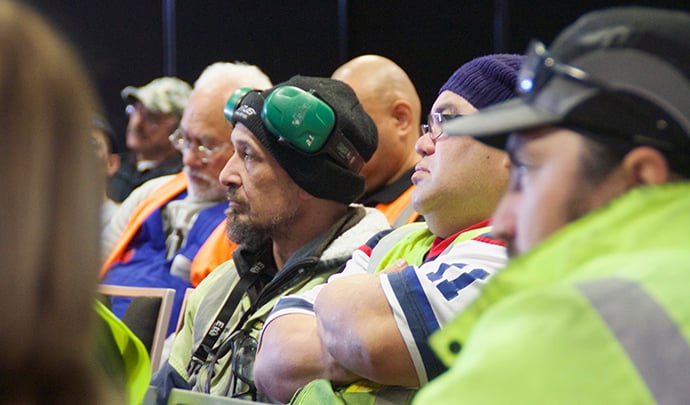 NZ Post members have ratified their collective agreement, which includes the biggest lift in pay
for years.

The three-year deal includes wages rises of 2% in years one and two, with 2.5% in the third year. Delivery agents and posties did even better with a 4% pay rise in year one.

There was no back-dating for non-union members, and some allowances also increased.

Post delegate Will Dunningham, says there’s been a lot of change and uncertainty at Post so the three-year agreement is a good one.

“In terms of the wage increases we haven’t had a deal this good in seven or eight years. We’ve been only getting figures around 1% so this is good.” 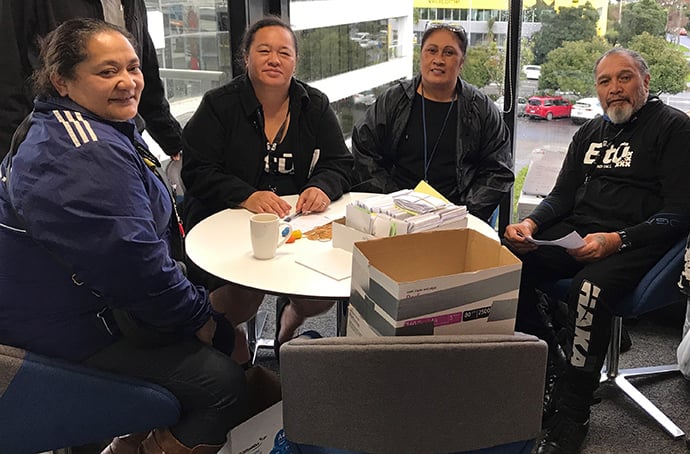 Standing tall in union has won a great deal for Tegel Taranaki workers, including pay rises of 3% each year for the next three years.

Nationally, the average wage and salary increase to June this year was just 1.6% – so you can see our members do better together!

Overtime provisions have improved with better payments, and because overtime is no longer compulsory people can turn it down within reason.

“I’ve got a growing family – two teenagers right down to a two-year-old. I stood up in our union because I don’t want Tegel to think it’s ok that in order to make ends meet you have to do overtime,” Sally says.

“My two teenagers look after my young ones because I’m on early starts and they miss out on being teens. Instead, they’re running around, sometimes being late to school because they need to get the little ones taken care of. That’s heaps of responsibility.

“Then I get home after working extra and can’t even enjoy a meal with my kids because I’m zombied out. Working like that, there’s no conversation about how their day was because I’m so tired and then I fall asleep early to get to work on time the next morning.

“Our 3% deal means my hourly rate starts to suit my family’s needs without doing heaps of overtime. This means I can spend more time with my little ones and talk to my teens about their own lives.” 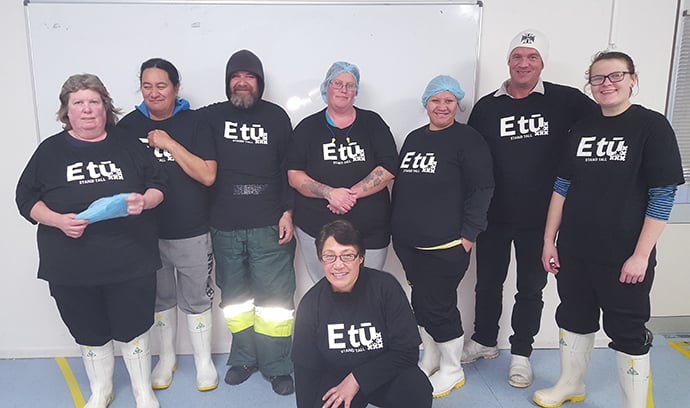 Jacinda is with us

Council trifecta for the Living Wage