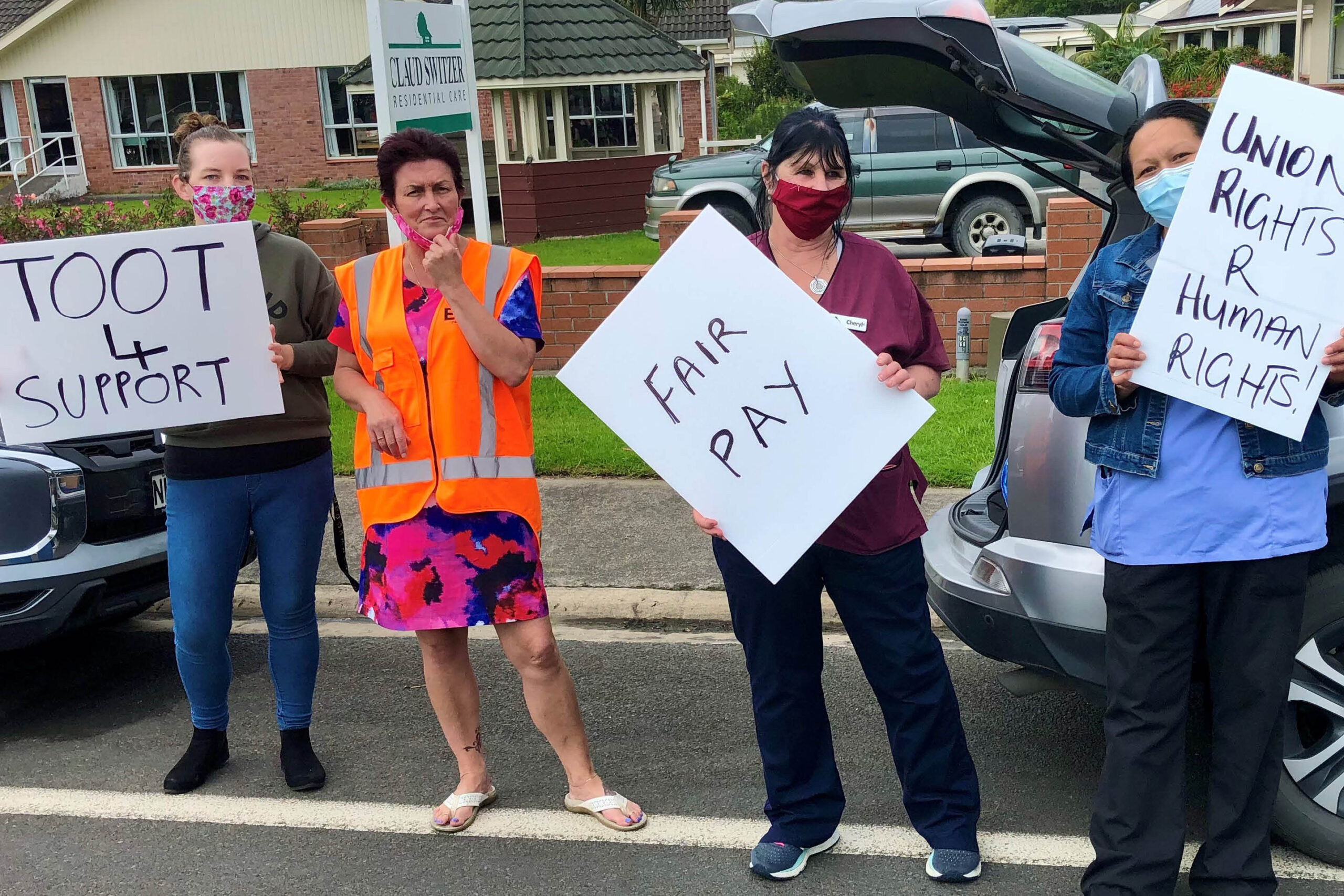 Tension is growing at a Northland town’s only rest home, as union members prepare to strike again with management refusing to back down on plans to cut weekend rates and making fresh proposals to reduce hours for some, despite bringing in unvaccinated workers when the home was short staffed.

E tū members working at the Claud Switzer Memorial Trust rest home in Kaitaia have been in negotiations for a new collective agreement since March.

However, the trust refuses to remove problematic clawbacks, including a proposal to reduce weekend allowance rates from $5 extra per hour to $12 for a whole shift, which for some would mean losing thousands from their annual income.

Several E tū members are now also facing a possible reduction in their overall hours. However, in the past fortnight, the employer brought in unvaccinated workers under exemption to fill staffing shortages – a move members say neither they nor the residents were notified about.

An E tū member, who doesn’t wish to be named, says morale at work is at an all-time low and the situation is getting worse.

“We also want to see our hours secured. It’s ridiculous and makes no sense why they would suggest cuts to workers’ hours when we are so short staffed already.”

The member says they are also seriously concerned about the lack of training and supervision for new staff.

Annie Tothill, E tū spokesperson and organiser at the site, says she believes the current situation could have been avoided, had the trust offered a fair settlement of the members’ collective agreement.

“Staff turnover is already high, and when workers feel disrespected and undervalued, it inevitably affects their commitment and desire to stay.

“That’s why fair conditions and pay are so important to retain safe levels of staffing and quality care for residents.

“In our view, it defies all logic and morality to propose a reduction in some members’ hours, when the management claims there is a staffing shortage and was prepared to risk having staff who are not vaccinated caring for vulnerable and elderly residents.”

Annie says strike action was not a decision that was taken lightly, nor without regard for the vulnerable residents that E tū members care for.

“They feel this is their only option to defend their current terms and allowances. It’s a last resort.”

Members would welcome a meeting with the board of Claud Switzer Memorial Trust to raise their concerns, resolve the current impasse, and come to a fair agreement on the members’ collective agreement, she says.

E tū members are also calling on the community to support them: “We need them to back us up and tell the rest home to sort this out.”

E tū members will be striking outside Claud Switzer Memorial Trust rest home, 71 South Road, Kaitaia on Thursday 16 December and Friday 17 December from 7am to 9am.