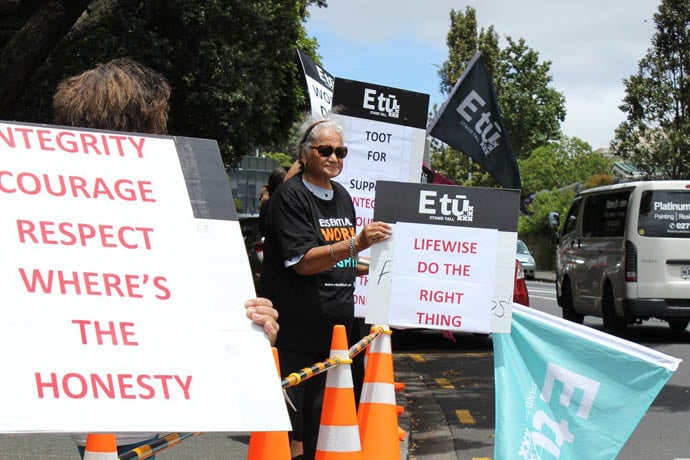 Workers at an Auckland home support provider will be striking this week, after talks to establish their first-ever collective agreement have failed.

On Monday, Lifewise workers will strike for certainty of hours, more sick leave, and respect from their employer, to be reflected in a collective agreement.

In bargaining sessions, the company agreed to increase sick and bereavement leave, as well as other benefits, but then went back on its word.

A Lifewise worker, who prefers not to be named, says the strike is about getting the collective agreement finalised, including the original terms and conditions Lifewise agreed to.

“Everybody’s just had enough of going through this – it’s been about a year and a half since we started bargaining the terms and conditions for our first collective.

“Now it’s about getting it on the table so we can get it finalised, and for the company to include the benefits they originally agreed to.”

Another worker, who remains anonymous, says the issue now is as much about the company’s integrity as the conditions themselves.

“It’s minimal, what we’re asking for. It’s frustrating for us as workers to have things like pay that is up and down, with no guarantee of hours and what we’ll earn every fortnight.

“The strike is a positive thing, so our voices are heard.”

E tū director Kirsty McCully says the organisation has a good reputation in the community, but workers are frustrated that this doesn’t match their experiences as employees.

“In a lengthy negotiation process, Lifewise has undermined bargaining by making offers and then withdrawing them,” she says.

“They are refusing to genuinely seek to resolve the core concern for workers – their ongoing security of hours and income. To these longstanding, dedicated homecare workers, many of whom have worked for Lifewise for 20 or 30 years, this has felt extremely disrespectful.”

“Workers feel they don’t have enough sick leave to keep their clients safe, but these are essential frontline workers who put their clients first every day of the pandemic,” she says.

“Decent work means decent pay, hours, and enough sick leave, and we need to provide this for all workers, and not least of all, our essential workers.”

Lifewise workers will strike and picket on Monday 14December at Lifewise offices, including 227 Mount Eden Road, Mount Eden, from 7am to 11am. Strike notices have been issued until Friday 18 December.