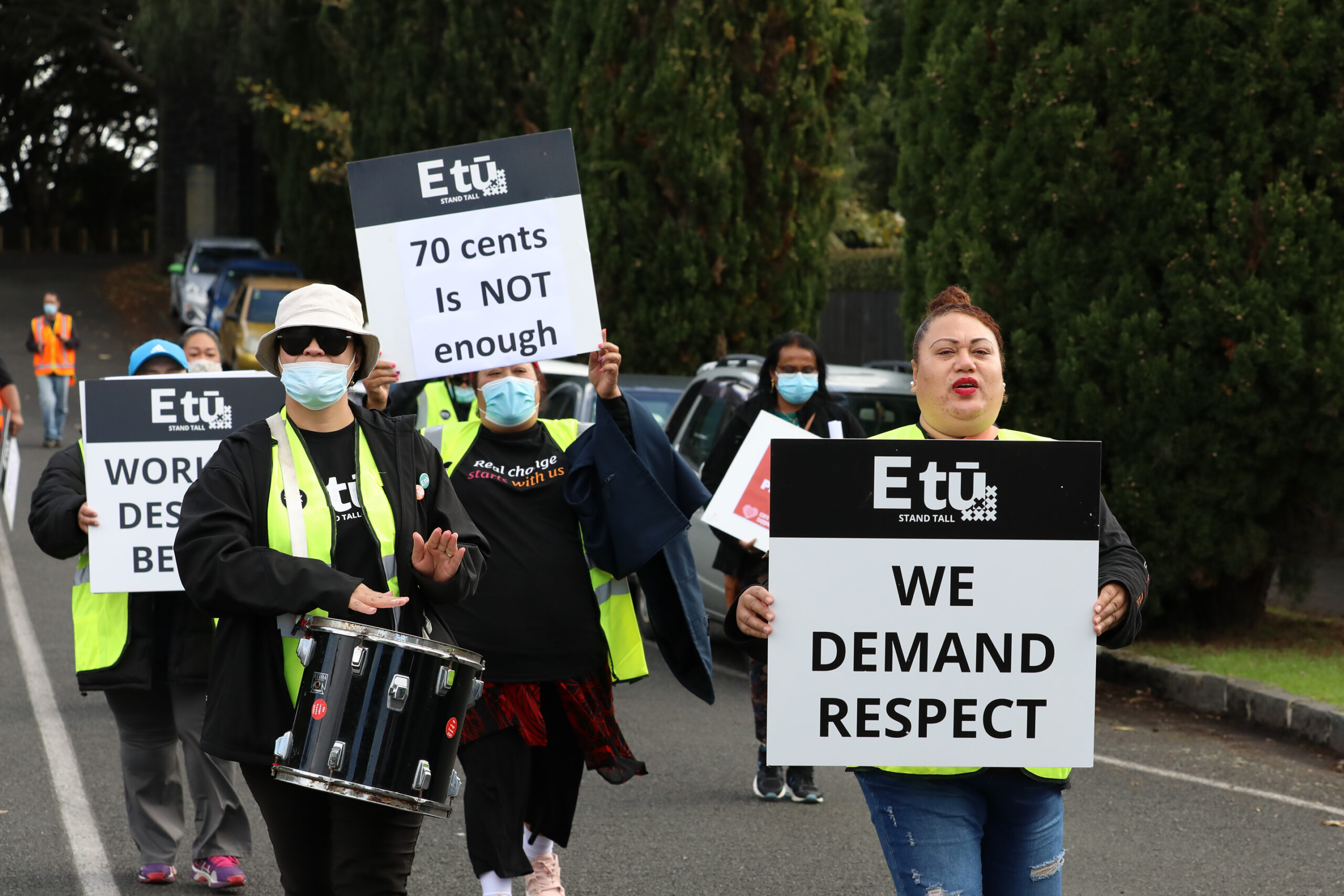 Care and support workers are “gutted and disappointed” after a Ministry of Health recommendation that will not see workers get a pay rise of more than 70 cents an hour for at least a year.

In May, workers rallied around the country and presented a petition with more than 10,000 signatures calling on the Government for a bigger pay rise as part of the renewal of the Care and Support Workers (Pay Equity) Settlement Act to combat worker shortages and financial hardship.

While workers are relieved that the Ministry has recommended Government extend the settlement, which sets their pay and conditions, and remove the current ban on pay equity claims, workers, their employers, and unions say a 70 cent or 2.8 percent increase on all existing wage rates will only exacerbate existing worker shortages.

Union delegate Pania Love says the pay decision is “gut wrenching” and puts huge pressure on those who choose to stay in the care and support sector.

“It feels like the work I do supporting people with disabilities and my level of skill has not been acknowledged.

“We are already understaffed and overworked. Due to work and pay rates, many staff new to the disability sector do not stay long enough to build skills to provide the level of quality care required with empathy and compassion.”

Pania says this puts huge pressure on the few trained, experienced staff who are left working “huge hours and feeling burnt out”.

“While our work remains undervalued and underpaid, we will struggle to attract new workers to provide quality services to the people we support.”

Union delegate Ginny Sarich says the decision is a “big setback” for care and support workers and the whole sector.

“It will be an additional challenge for the people in our care, as they may lose the support workers that they’ve worked with for a long time to better, higher-paid jobs.

PSA Assistant Secretary Melissa Woolley says the Ministry’s recommendation is disappointing to workers across the care and support sectors.

“The original settlement was historic as it started to value the work of these workers. With inflation sitting at 6.9 percent, the increase the Ministry of Health has recommended to workers will leave them still struggling to provide for themselves and their whānau.”

Melissa says unions will raise a pay equity claim on 1 July to ensure workers truly get the pay equity they deserve.

“But that process will take time to reach an outcome, and in the meantime, workers will struggle to live on low wages.”

E tū Director Kirsty McCully says the decision not to raise wages for at least the next 18 months while a pay equity claim is processed will drive workers out of the sector – at a time when providers struggle to recruit them in the first place.

“We know there are already service shortages, and these will only increase as workers tell us they are leaving the sector to get better-paid jobs in work that’s less dangerous and difficult.”

Kirsty says not only is the care and support workforce losing its most skilled and experienced workers, but it’s also very difficult to attract new workers to the sector because of the low pay and inherently challenging nature of the work.

“The conditions for our workers also affect the thousands of people needing care in the community that they support.

“This isn’t just for workers, but for all who require care to live full and independent lives.”