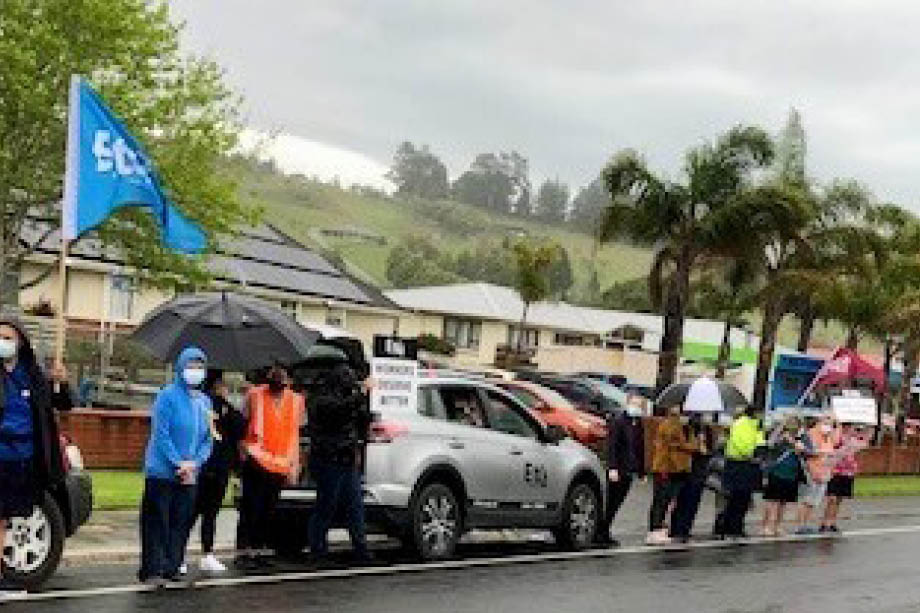 Workers at the sole rest home in a rural Northland town are striking again over proposed pay cuts to their allowances and other problematic clauses in their new collective agreement.

Members at Claud Switzer Rest Home in Kaitaia have been in negotiations since May, and in desperation for their employer to listen, have started taking strike action.

The employer wants to cut or reduce members’ allowances and other benefits, notably reducing pay for weekend work, removing workers’ job security with a force majeure clause, and other changes to their conditions of employment.

Management also circulated documents to workers that threaten possible redundancies and a decrease in the number of beds, due to an implied lack of building and refurbishment funds if workers don’t accept the new collective agreement.

Longtime worker at Claud Switzer and E tū member Kam Wijohn, who only works weekends so she can care for her grandchildren during the week, says workers at the home are feeling angry and unhappy about the situation.

“We feel that our employer isn’t listening to how we’re feeling,” she says.

“We have mortgages, we’re trying to pay for our own homes. To have that cut in pay would be really hard – we rely on that pay.”

Kam estimates that she’d potentially be losing thousands from her pay per year if her weekend allowance is eventually reduced from an extra $5 per hour to just $12 for the whole shift.

“My husband is on minimum wage. That’s why we compromise – he works during the week while I care for the grandkids, and I work the weekends.”

Kam says she’s also worried about another clause which would potentially give the employer the right to terminate workers on medical grounds, without necessarily providing time to recover or for a plan to return to work.

Residents are also aware of what’s going on for workers, she says.

E tū organiser Annie Tothill says the proposed agreement will only exacerbate the short staffing situation in the home and increase turnover.

“Staff turnover is already increasing, rosters issued are full of gaps, and staff levels on the weekends are becoming unsafe. Staff morale is very low,” she says.

“In our view, the employer will spend more money in recruiting and training new staff than what they may save reducing allowances.”

Annie says the employer has not acted well during the negotiation process, including shifting the goalposts by going back on their word to make additions that hadn’t been previously discussed.

Members will continue to take action until they reach a fair agreement, she says.

“The members at Claud Switzer are very committed to their residents and genuinely care for the people they look after,” she says.

“The positive support and response they’ve received from the community only reinforce their commitment to stand together for decent pay and conditions, which are so badly needed in the aged care sector.”