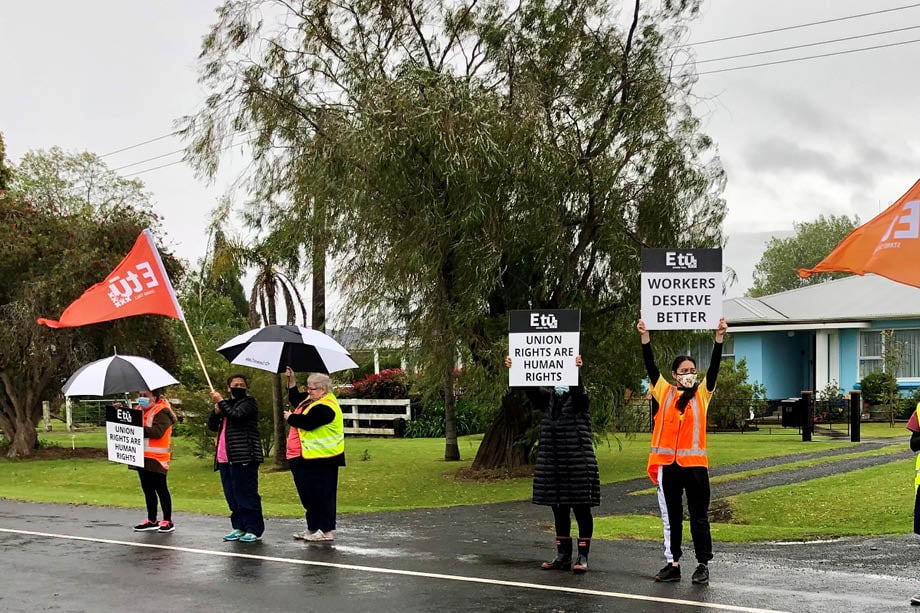 Union members at a Northland rest home, who are desperate to avoid potentially losing pay and staff with proposed cuts to their pay and other collective rights, went on strike for an hour on Thursday.

Claud Switzer Memorial Trust, which runs the only rest home in Kaitaia, has proposed scrapping special pay allowances for health care assistants and domestic staff working weekend shifts, along with other benefits, as part of a new collective agreement.

Workers are currently being paid an additional $5 per hour to work on a weekend, and the employer wants to reduce this to just $12 extra in total for any weekend shift.

In a poster issued by management, the trust claims the future for the home is grim if workers don’t accept the new agreement – with around 20 residents needing to be moved and a 20% cut in staff due to lack of funds for a new building and upgrades.

“Our members are getting stressed out – they’re very unhappy,” says one.

“The weekend incentive rate management is trying to take away was the reason everyone was coming to work at that time – it was already a struggle to fill the weekend.”

Short staffing is already a huge issue in the aged care sector, and finding staff presents even more of a challenge during the Covid crisis, delegates say.

“We’re anticipating some change already with mandatory vaccinations coming in and having to take precautions – like wearing masks at work all day with summer coming – makes work more difficult for everyone.”

Delegates emphasise that the one-hour strike is a last resort to get management to listen.

“We all love our jobs – the hardest thing for us to do is to walk out. We’re walking out on human beings, not toilets and floors. It’s very disheartening for us.”

E tū organiser Annie Tothill says members have been bargaining since May and in mediation since August, in an effort to secure a fair collective agreement.

She estimates that without the weekend allowances, those workers working weekends as part of their 40 hour-week may miss out on up to $3,000 extra per year.

“There are quite a few workers who incorporate a Saturday or Sunday shift into their weeks – and some people only work weekends because of childcare responsibilities.”

The current $5 per hour is a reward for working unsociable hours, she says.

“The employer has said it can’t afford to pay workers the allowance and claims it pays more than other rest homes in the area,” Annie says.

“However, they won’t tell us which rest homes they’re referring to. From our own research across New Zealand rest homes, it would appear $5 per hour is average for workers who are working weekends as part of their normal 40-hour week.”

Annie says the employer is also trying to justify its position, claiming it needs the funds for building work and upgrades – or workers face losing residents and colleagues.

“Workers at Claud Switzer deserve to be fairly compensated for the work they do and to see their hard-won working rights upheld as they care for the most vulnerable in our communities.”