From one day to the next, around 150 workers at a major printing factory found themselves facing notice of redundancy without any consultation.

Ovato, a major producer of magazines in New Zealand, announced that it would be closing the headset printing arm of its business in April at its only remaining plant in Auckland.

But within a day of the media covering the story and companies ringing in with offers of work, E tū set up a mini job expo with around 10 businesses to help Ovato members get into new roles in industries that need similar skills.

Longtime delegate Bart de Prinse, who was at the company on and off for more than 20 years, says the job expo offered roles and opportunities that would draw on members’ transferable skills. 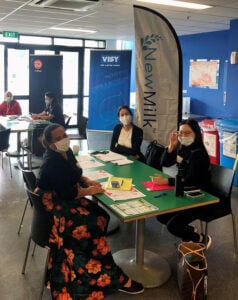 The pop-up jobs expo was held in Ovato’s lunchroom

“Printing in itself is quite a varied market – there are quite a few different types of printing. There was a good variation of roles there.”

Bart says in the rush of the proposal, some Ovato staff didn’t know yet if they’d be staying to help with the closure or were no longer required.

“There are still a lot of people looking for answers which is sad, but hopefully that will be sorted.

“E tū has been quite supportive and the company cooperated. Everybody’s come together to help the staff as best they can.”