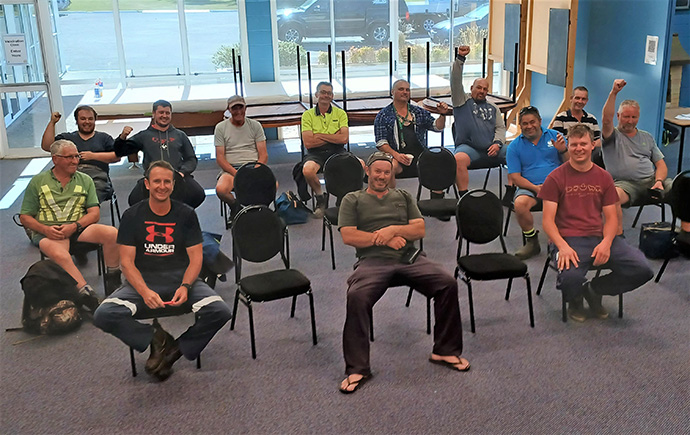 Winstone Pulp members after the ratification

E tū members have won a pay rise of more than 9.2% over two years at Winstone Pulp.

Workers are delighted with their recent settlement and believe their strike on overtime played a big part in the win.

All union members will now see the pay-off of their organising and refusal to work overtime during the summer period.

E tū members, who mostly work in the maintenance team, also won an increased overtime rate of T1.7 for tradies.

Negotiation talks for their collective broke down just before Christmas when Winstone Pulp International (WPI) came back offering no increase in pay for members.

Members in E tū and FIRST Union voted unanimously for industrial action by way of an overtime ban.

The company then offered a one-off payment instead of a pay increase.

However, members didn’t think this was fair, after accepting only small pay rises over the years in order to help the company out.

Winstone Pulp delegate Dan Abernethy says after the strike things resolved faster than he thought they would.

“We also got a lot more than I thought we would – we were actually quite surprised,” he says.

“This is one of the best settlements that we’ve ever had at WPI.”

By February, the parties were in mediation and the company came to the table with not a one- but a two-year deal, which Dan says has worked out well for members in the longer term.

“Reading between the lines, I think that basically management wanted to get the place up and running and back to normal as soon as possible.”

Dan says Covid has complicated what has been a tumultuous time for the pulp industry, as business is affected by many factors, including transport costs, power prices, and buyers paying on time.