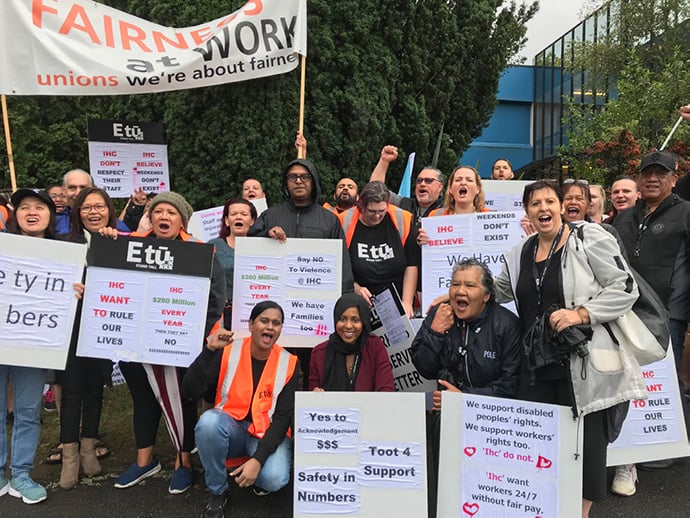 Seven months into bargaining for a new collective,a second wave of strikes by 3000 union members at IDEA Services, the operational arm of IHC, is due to start this month.

In nationwide ballots, support workers voted overwhelmingly for up to seven separate strikes to reinforce their message to IDEA.

Bargaining team members Gill Moore from Northland and Gordon Cambridge from Southland were among hundreds of members who went on strike for four hours on 1 April, and are ready to do so again.

“Every day we go the extra mile for the people we support at IDEA, but management seems to have closed their ears and eyes to our concerns,” says Jill.

Gordon agrees. “IDEA staff are incredibly loyal to the people they support. But we don’t see that returned by IDEA.”

The dispute was initially about pay, with delegates pushing to restore $22 million of seniority margins as well as weekend and overtime rates axed by IDEA in the 1990s. However, when members reduced their asking price for weekend work, IDEA said it wasn’t about the money.

“They’ve told us this is about the principle that weekend work was the same as working Monday to Friday,” says bargaining team member Anushiya Sethupathy. This has angered many members. As the weeks have unfolded, IDEA has also pushed hard to try and force workers to move between worksites.

For many, the last straw has been a claim by IDEA to gut hard-won health and safety rights.
Bargaining team member Nic Corrigan says one of the big dangers at work is client-initiated violence, also known as ‘challenging behaviour’.

“We have repeatedly asked for a conversation around safe staffing, and management’s solution is to remove the reference to clients altogether. That’s what I call ‘challenging behaviour’!” says Nic.

During the bargaining, delegates tabled three respected surveys that highlighted the levels of workplace violence over the last 20 years. IDEA has yet to respond.

Fuji Xerox members are standing strong, determined to settle their collective agreement, with back pay, as Fuji fights back with anti-union tactics and the targeting of our members. Several have faced disciplinary action in the wake of five full days of strike action in March.

The strikes, which included a picket on a cricket pitch, are a measure of how strongly the members feel after Fuji Xerox offered a tiny 2% pay rise, which they refuse to back-date to July last year when their collective agreement expired. It is now close to a year since they have had a pay rise, and the nub of the dispute is a claim for back pay for 2018. 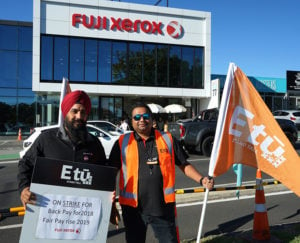 With talks at stalemate, in April our members sought mediation. Fuji Xerox has dragged its feet, but members hope to meet this month.

“We want to be able to talk to our employer, to get an acknowledgement that pay offers have been too low. Not just this year, but all the time. We want 2% for 2018 and 2% for 2019. That means we’re owed back pay,” says delegate Rav Kumar.

That doesn’t deter Rav: “We’re all standing strong. We believe in the union for getting fairness into our workplace.”

It’s clear Fuji Xerox expects its workers to pay the price for its own scandalous losses through accounting irregularities – a massive $285 million dollars worth! In 2017, the company was banned from holding government contracts, which at the time were worth about $70 million. That ban has been lifted and cash flow is also improving. It’s a sign of a return to financial health, so the workers deserve their fair share.

Members covered by the Metals and Plastics Multi-Employer Collective Agreements (MECA) are being urged to get involved in the campaign to improve both agreements. Members met earlier this month for mass meetings in Auckland, Wellington and Christchurch to endorse claims ahead of bargaining in June and July.

The two MECAs are the primary industrial documents for members in the manufacturing and engineering industries. Both documents expire this year.

Training modules have been reviewed and payments for qualifications are under review now. Delegate Peter Heatley says the goal is for the two agreements to include the best of both documents.

He says a key focus is upskilling the workforce. “We’ve got to become more skilled at what we do because it’s not just good for workers, it’s also good for the industry.”

Peter says there also needs to be recognition of any extra qualifications gained by the members. “As you go up the scale, payments need to increase. That’s important.” 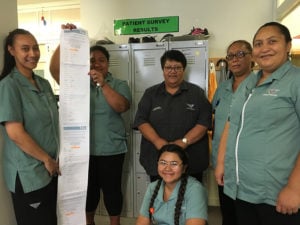 Our public hospital members celebrated when the new District Health Board (DHB) Multi-Employer Collective Agreement was ratified last December, meaning big pay rises. But it has been hard work for many getting the money after some DHBs proved to be tardy payers.

Back in February, our members at the Capital and Coast and Hutt Valley DHBs decided they’d waited long enough. They launched a petition calling on the DHBs to pay up! After all, members at the Auckland DHBs – the country’s largest – were paid within weeks, so why the wait?

Long story short, everyone signed: orderlies, kitchen workers, and cleaners. The petition was presented to Human Resources and the response was swift. A letter went out to members with an apology and a date, 28 February, for the new pay and back pay. Great work, everyone!

Cleaning member Renna Whatuira-Tangipo is proud of what she and her workmates achieved.

“I felt relieved to know what was going on, because we’d had no information whatever, especially when other DHBs had their pay. We’re just really excited that it’s finally been done, and we have been recognised.”

Cleaning supervisor Maria Turahui is proud of her staff, and says when it comes to the union, “they’re solid!”

Meanwhile, OCS, the hospital contractor for the Wairarapa and Hawkes Bay DHBs, refused to settle, saying the DHB hadn’t guaranteed the money. The DHB denied there was any problem. To break the stalemate, members voted to strike!

Wairarapa delegate Kerry Hargood says he and his co-workers thought the money would be paid out by Christmas and feelings were running high: “A lot of people were desperate for the money,” says Kerry. Then, with the strike just hours away, a proposed settlement was reached. Kerry says his co-workers were delighted. “Even the doctors were high-fiving us!

“It was a great effort from the team. It was a lot of stress on people and the relief hasn’t come soon enough for some of my workmates,” he says.

The last to receive the back pay were our members working for hospital service contractor, ISS at Waikato, Bay of Plenty, Southern and West Coast DHBs. At Easter they were still waiting, so they also organised petitions which were sent to all ISS senior managers with messages about the hardship payment delays were causing.

Within hours of receiving the petitions and a letter from our legal advisors, ISS agreed to pay the back pay at the next pay day. Now that’s a result!

A survey of E tū and NZ Nurses Organisation members has revealed both the despair of carers and the poor quality of care for many residents as a result of understaffed care homes.

The survey results are included in the report, In Safe Hands, officially released at the launch of the Insafehands campaign in March. This calls for a review of current, voluntary staffing standards, and for higher mandatory staffing levels.

The report shows just one in ten staff believe their rest home is staffed for quality care, with many carers worked to exhaustion as a result of heavy workloads.

Caregiver and delegate Ronnie Smith, who attended the launch, says many carers, particularly on dementia wings, are going without breaks. “They’re finding it very stressful. Residents aren’t getting as much quality time as you’d like to give as you have to go through things so quickly.”

The report says care is often rationed, with residents missing basic cares such as regular showers. Residents also ration their own care. In one tragic case, a man died of a wound infection because he didn’t want to bother his carers. Members in some facilities report staffing by just two carers for up to 60 people, on some shifts.

“If we had safe staffing it’d be so much better for the residents and for staff. They wouldn’t get sick and stressed, and mistakes happen too,” says Ronnie.

Meanwhile our members are distributing postcards urging safer staffing ratios, with families and friends asked to send these to MPs to give the campaign a push.

“I’ve got everyone to sign the postcards and get them sent out,” says Ronnie.

Hundreds of wanted posters are being circulated among IDEA support workers, targeting the board of IDEA’s parent company, IHC. The posters are a response to a refusal by IDEA Services managers to allow the union’s bargaining team to meet board members.

“They may not want to talk to us, so we thought we’d send them a message,” says bargaining team member Nicky Garmonsway. “All we want is a conversation.” 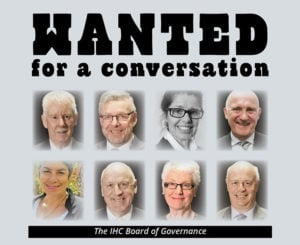