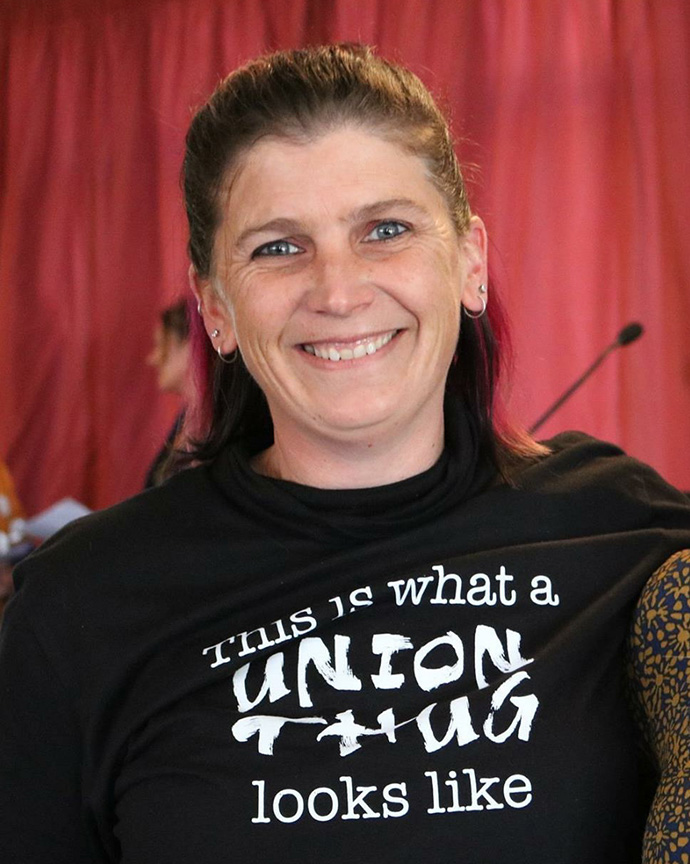 Christchurch delegate, Natasha Packham, has always been “union proud,” and a union member since she started work at 16.

“My dad was a delegate all his life. He got an award from the union and for his workplace, which was
pro-union as well, and I guess his values rubbed off on me,” says Natasha.

Natasha was one of the first women to complete a printing apprenticeship at Amcor’s Carmen Road premises. Today she’s one of just two women printers at the firm’s Branston Street plant.

Blazing that trail was tough, she says.

“It hasn’t been easy and it wouldn’t have been easy for them either,” says Natasha. “Doing the work didn’t come into it – suddenly there was a woman – and all of a sudden things had to change slightly.”

But Natasha won her workmates over as she worked to improve the collective agreement and campaigned on issues like equal pay.

“They saw what they could do under a collective agreement and then saw my campaigning for equal rights and gender equality and they looked at me as being a campaigner for the better cause, so to speak.”

Today, Natasha is Deputy Convenor of the E tū Manufacturing Industry Council, a National Executive member and her site’s senior delegate. Union density on her worksite is more than 90%.

“The delegates I work with are active and hands-on. We’re working together to do better things, it’s a great feeling and I think we’re going to make a great change at negotiation time in January.”

Not everywhere is so well organised, as Natasha has discovered during visits to other sites as part of an Industry Council initiative for delegates to network across their industry.

Some sites had no delegate and Natasha gave advice on how to elect one, as well as helping with online technology.

“I think I helped a few of them, helped open their eyes to what they were lacking in a few areas. I’ve walked a couple of them through how to sign up online so they could show other members how to access the magazine and everything else on the campaigns we’ve got running. A lot of them don’t realise how to do these things.”

Now Natasha is blazing a new trail, working with Amcor on a skill-based pay scale similar to the equal pay settlement.

“It’ll be remuneration-based which will give people more opportunity to earn more income and allowances by learning more skills; or there are skills they’ve got and should be earning more because of that.”

The system will also mean skills retraining when machines replace people. “With negotiations in January, we’ve got till then to smooth things out,” she says.

“It’s always resonated with me what the union stands for – the importance of a focus on gender bias and equal pay. It’s exactly where I want it to be and I couldn’t be more proud to be a member of my union at the moment.”

Jacinda is with us

Council trifecta for the Living Wage